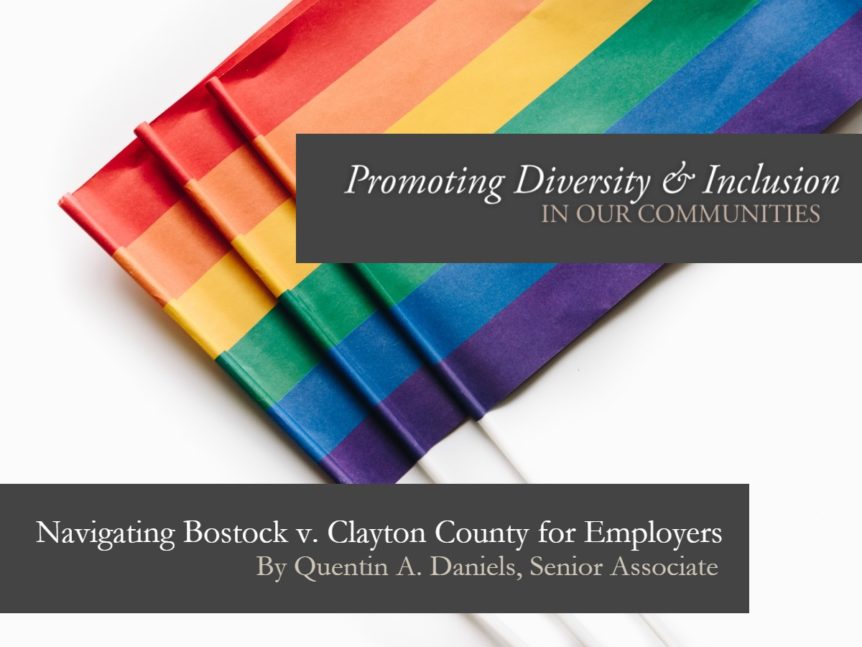 Far from every United State Supreme Court opinion ends up being covered as a top story by major online and broadcast media.  Bostock vs. Clayton County, Georgia is an exception, not as much for any fine legal points covered in the opinion, but because of the social and cultural implications for the LGBTQ+ community in the context of employment rights.  Following the Supreme Court’s 2015 Obergefell v. Hodges decision, which legalized same-sex marriage, most gay and transgender employees found themselves in the unusual quandary of having a constitutional right to be married one day, while facing the prospect of being terminated from employment the very next day for having done so and/or simply for being gay or transgender.  The U.S. Supreme Court’s June 15, 2020 opinion in Bostock eliminates that legal quandary, at least for gay and transgender employees whose employers are subject to Title VII of the Civil Rights Act of 1964.  Every expansion in employee rights under Title VII is attended by an expansion of employer obligations.  All public and private sector employers with fifteen or more employees are covered by Title VII, which prohibits discrimination on the basis of race, sex, religion, and national origin. See 42 U.S.C. § 42e et seq.  From this standpoint, Bostock is not without significant implications for employers.

Bostock did not change the substance of the law, but instead interpreted Title VII’s prohibition of discrimination on the basis of sex to include gay and transgender individuals.  Per Justice Gorsuch, who wrote the majority opinion:

“Today, we must decide whether an employer can fire someone simply for being homosexual or transgender.  The answer is clear.  An employer who fires an individual for being homosexual or transgender fires that person for traits or actions it would not have questioned in members of a different sex.  Sex plays a necessary and undisguisable role in the decision, exactly what Title VII forbids.”

Thus, in short, adverse employment actions taken against an employee simply for being gay or transgender equals illegal discrimination based upon sex.  A question expected to be on the minds of employers and Human Resources personnel is “what now?”  The short answers are: Update; Train; Pay attention; be Proactive; be Meaningfully Responsive.

Under President Barack Obama’s administration, the EEOC had issued official “Guidance” for employers regarding discrimination against employees who were gay or transgender.  See, for example https://www.eeoc.gov/laws/guidance/what-you-should-know-eeoc-and-enforcement-protections-lgbt-workers  This guidance and all the documents published thereunder in May of 2015, “do not have the force and effect of law and are not meant to bind the public in any way. This document is intended only to provide clarity to the public regarding existing requirements under the law or agency policies.”  It is worth noting that the EEOC Guidance page reference above now contains the following: “NOTE: As a result of the Supreme Court’s decision in Bostock v. Clayton County, we are currently working on updating this page.”  Despite the disclaimer in the note, the EEOC page provides a good starting place for employers as they prepare to update their employee handbooks and workplace policies.  The Human Rights Campaign website also provides materials and links to other organizations who may provide workplace diversity training and continuing education opportunities on sexual orientation and gender identity issues.  https://www.hrc.org/resources/diversity-training-on-sexual-orientation-and-gender-identity-issues

It would be naïve to assume that there will not be resistance or “pushback” to the workplace changes as a result of the Supreme Court’s ruling in Bostock.  Some of the resistance will be secular, some of it based on religious beliefs.  Nevertheless, as far as Title VII is concerned, neither employers or co-workers may use their religious beliefs to discriminate against employees who are now in another Title VII protected class, just as one could not rely on a “sincerely held religious belief” to discriminate against an individual because of that individual’s race, religion, or national origin.  As always, the preferable way to deal with anticipated workplace discrimination issues is to train proactively, rather than after the fact or after litigation has commenced.  How your company approaches workplace discrimination issues can go a long way in helping prevent litigation and/or defending your company in the course of any Title VII litigation.